Home / About / Blog / The Cobra Effect and Land Use

The Cobra Effect and Land Use

Are we creating infrastructure now that will be enormously expensive later when it needs to be repaired or replaced? Although land use decisions are generally intended to make our communities better, they can actually make our communities worse off if we haven’t considered long term impacts.

Let’s start with a story.
In rural India…there are cobras…
For many years, India was under British Colonial Rule. One day, a British fellow thought of an idea for reducing the number of cobras. He created a bounty system, whereby folks were paid by the cobra, for each dead cobra they brought in. This worked for a while, but eventually people figured out it was much easier (and profitable) to bring in dead cobras they had bred and raised rather than trying to find them in the wild (and who wants to do that – that’s dangerous!). The British authorities caught on to this, and ended the bounty program. This was NOT what they intended. So what did all of the cobra breeders do with the leftover cobras? Well they let them loose in the wild (of course), which led to there being MORE cobras than when they started the bounty system.

Thus was born the phrase “Cobra Effect” or law of unintended consequences, stemming from an attempt to solve a problem but in the process actually making it worse.

Our cities often develop in ways that are really inefficient from a long-term maintenance standpoint. When all of that shiny new infrastructure the local governments have inherited falls apart, there may not be enough funding to repair it.

In particular – taxes generated from certain types of land use won’t create enough revenue for the local community to someday pay for replacing the infrastructure supporting that land use.

A specific example is in Omaha, Nebraska, where the City inherited a number of developer constructed roads. The City eventually ran into a shortage of funds for their city-wide pavement maintenance program. As a result, in some locations the City was forced to pulverize some of the developer constructed roads (which were substandard in some cases), converting them into dirt roads. Not a popular outcome for the residents.

The more structural a piece of infrastructure is, the more expensive it will be to someday replace. In Denver a prominent such example involves the highly political I-70 viaduct project (also known as the Central 70 project). Several miles of I-70 were built as a viaduct back in the 1960’s, and there is an ongoing project to reconstruct this section of the interstate to lower it, widen it, and place a lid over the top of sections of it. 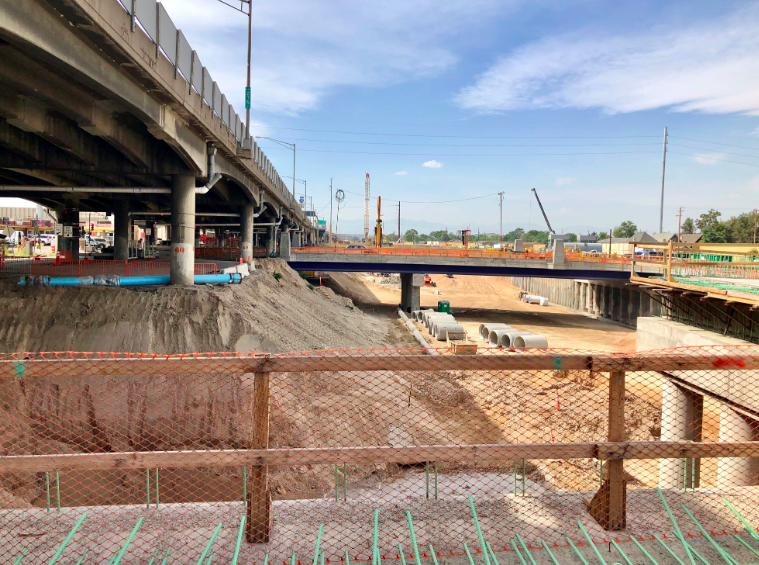 This has evolved into a $1 billion project. This project has become very political, and the merits of the current design approach could be argued, but what can’t be argued is the old viaduct was in disrepair and needed replacement. The viaduct only lasted around 50 years and its current condition is way past being an issue of maintenance. It’s now another capital project. The point is that really structural infrastructure will need to be rebuilt again, and again, and at a very high cost each time.

Roads are an example of linear infrastructure. Another type of linear infrastructure would be drainageways. Similar to roads, there are ways of configuring our drainageways (streams) that will be substantially more expensive, or cheaper in the long run. Much of our ability to create longer lasting, more resilient streams rests on the amount of land we have to work with. The aerial comparison below shows how contrasting this can be. These aerial images are taken from the exact same altitude. 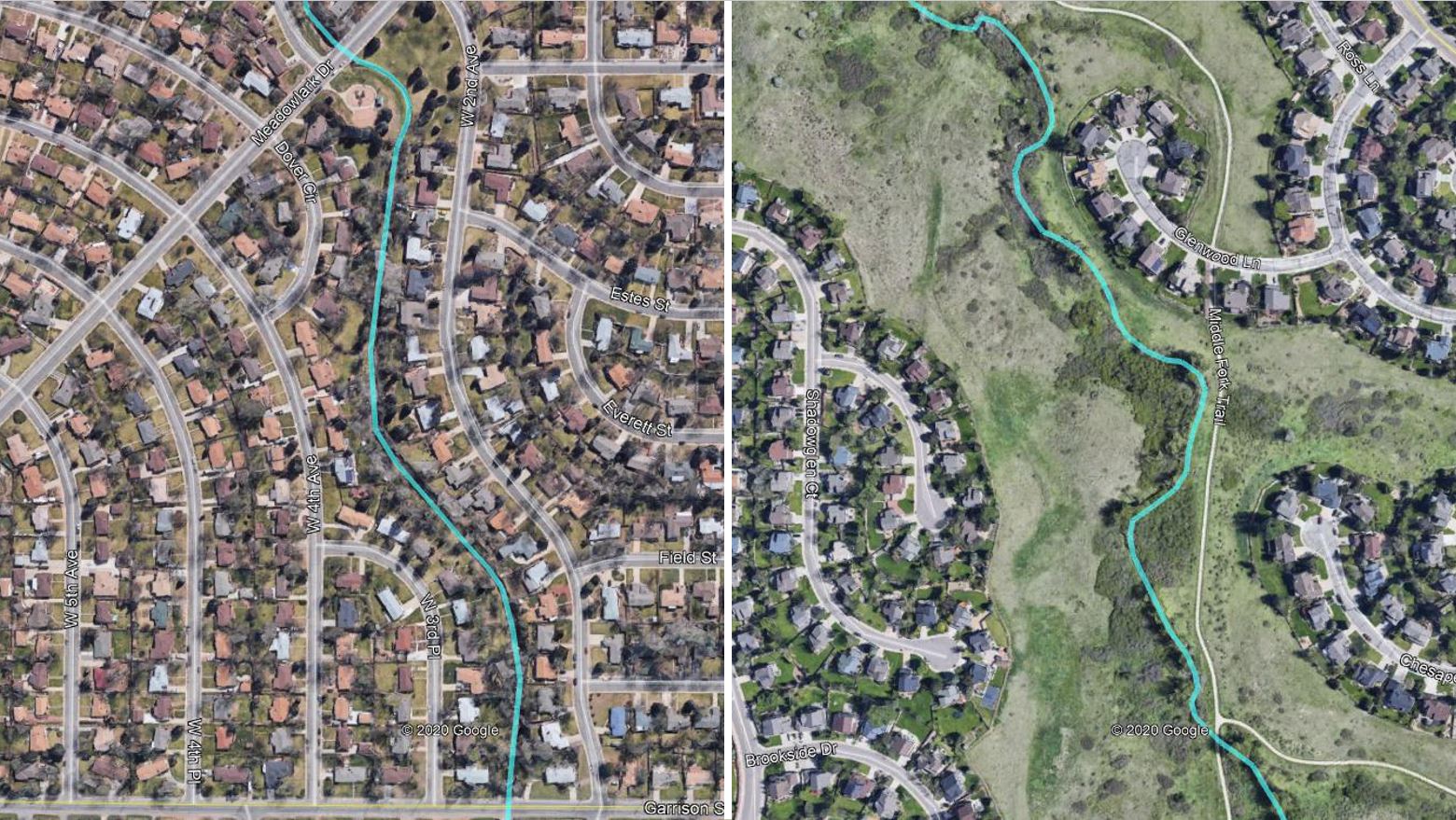 When land use decisions force us to confine our streams, the water flows faster and deeper, putting more stress on the bed and banks. This explains the history of building concrete lined channels around the country – the concrete was necessary to withstand the depth and velocity of flow caused by the confinement. Think of how the water speeds up on your garden hose when you stick your thumb over the end – the same principal applies here. You shrink the area, the water moves faster. 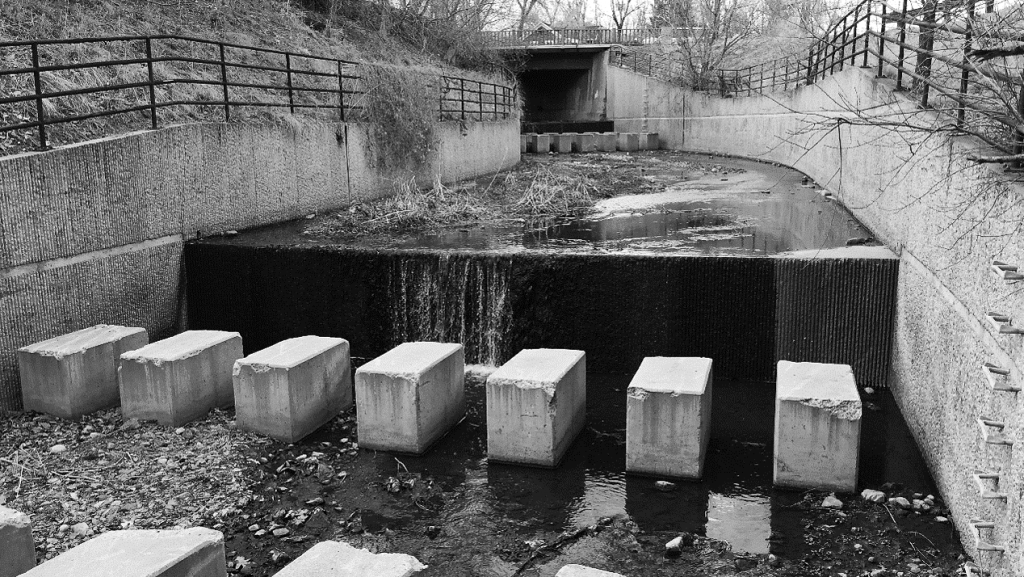 When we open the banks up a bit, we need less rock and concrete, but the photo below is still quite structural. 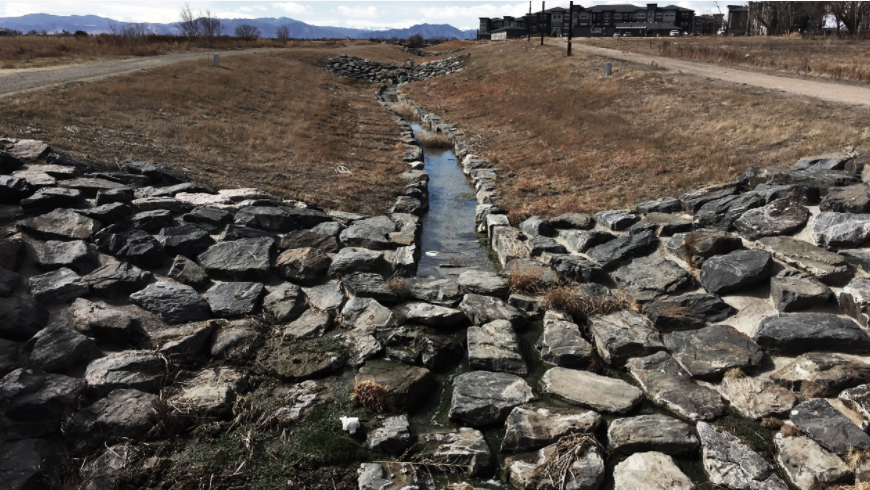 On this next one we’re doing a little better. 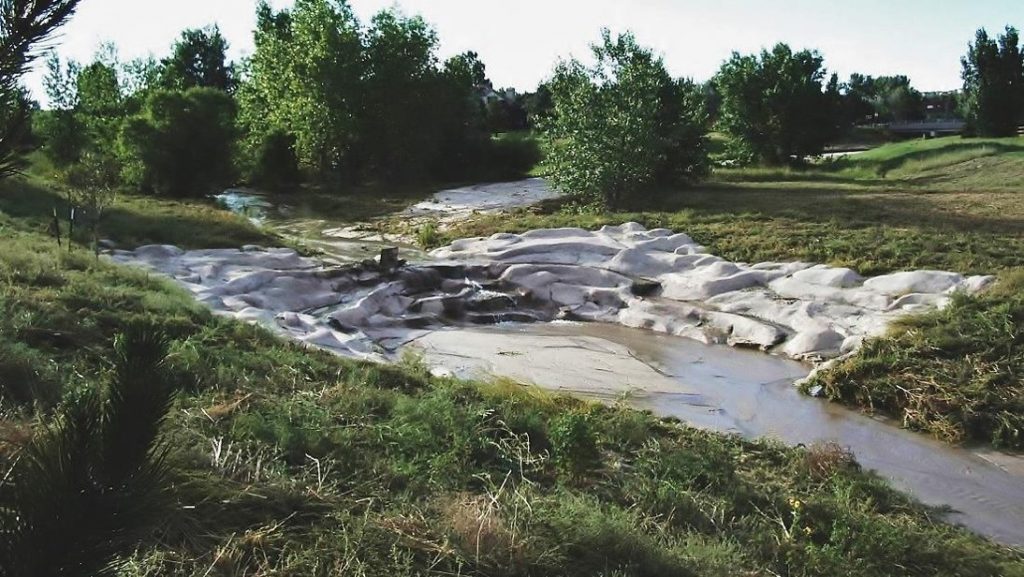 This last photo along Westerly Creek is more of the ideal situation where we’ve given the stream plenty of room and we don’t need to import nearly as much rock and concrete. This is an engineered channel that used to sit under the runways of the old Stapleton Airport. Sometimes we don’t have the room to do this, but this is the ideal. With space for flood flows to spread out, resilience is achieved with healthy vegetation instead of a bunch of rock or concrete. 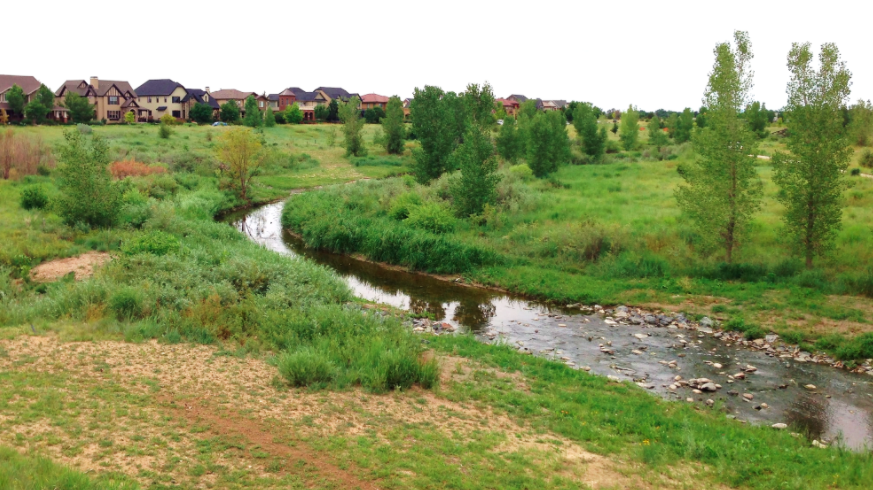 Like with the I-70 viaduct example, the more structural our stream improvements are, the more expensive they will be in the long run, and in many cases, the local taxes generated will never provide enough funding for us to keep up with repairs as these things wear out.

I work for a government agency called the Mile High Flood District (District). We facilitate the rhyme and reason to how our streams our managed as they cross city and county boundaries in the Denver metro region. One of our services includes long term maintenance of urban stream systems.

Let me give you a range of examples that illustrate the financial implications of poor land use and infrastructure decisions that impact our urban stream systems.

Here we are looking at Lena Gulch upstream of 6th Avenue near Colfax Avenue. To allow for more property to be developed, the stream was shoved into a rectangular concrete channel section, seen on the photo on the left. 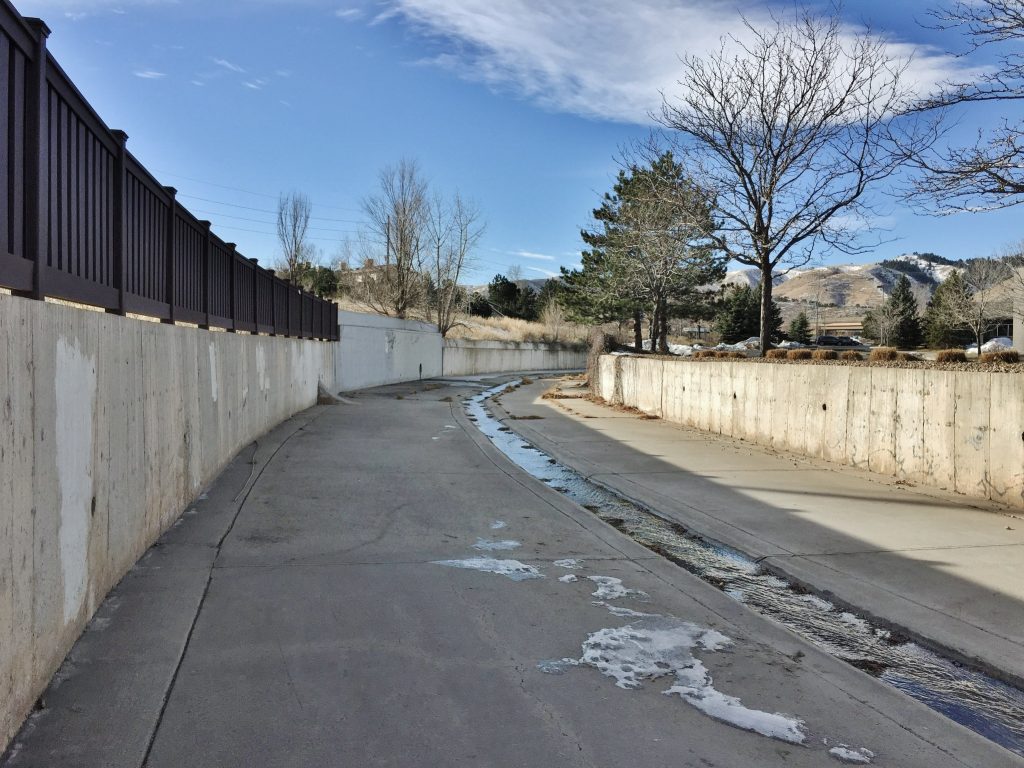 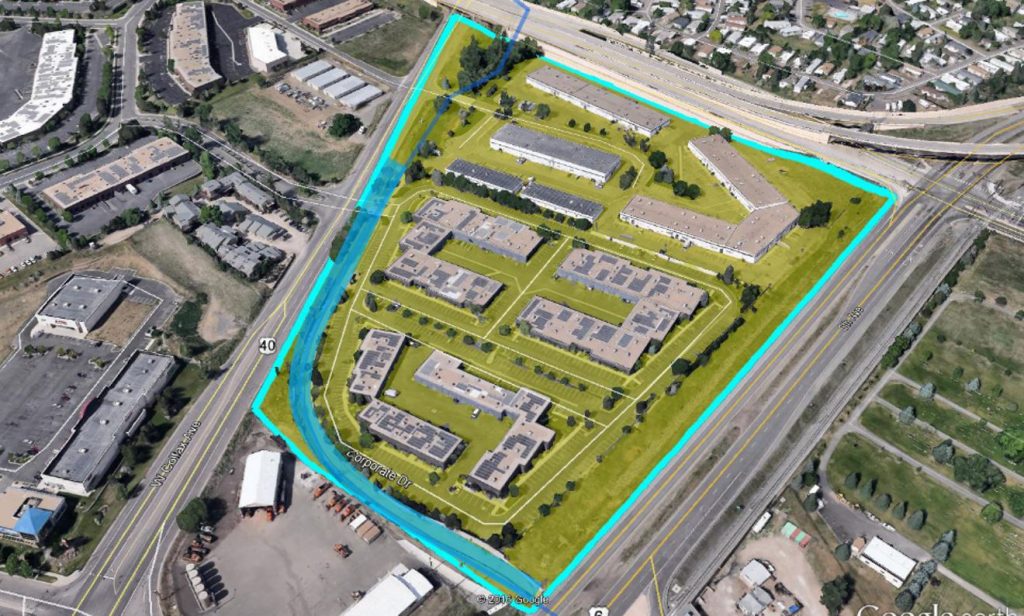 The channel was built this way to allow for a few extra commercial buildings. I looked into how much this property is worth, and with a little math was able to figure out how much funding the District collects from this property each year. We get around $270 in total revenue from this property, around $100 of that is for maintenance. I looked at what it would cost to fully replace all of this concrete someday, and determined it would take over 17,000 years for us to build up enough funding from this property to pay to replace the channel infrastructure. No, I am NOT making that up.

Make no mistake – the channel was configured in this way to benefit this particular property. We’ve lost all ecological and recreational functions, and it will be a serious financial burden for the entire community.

Let’s look at a few other locations. Here we’re at the Maxwell Tributary in the Montbello area of Denver. It’s a concrete lined channel that is undersized (see photo on the left). The real estate in the watershed directly adjacent to this channel is worth over $200 million, which allows us to collect around $10,000 a year total. Around $3,700 of that is for maintenance. 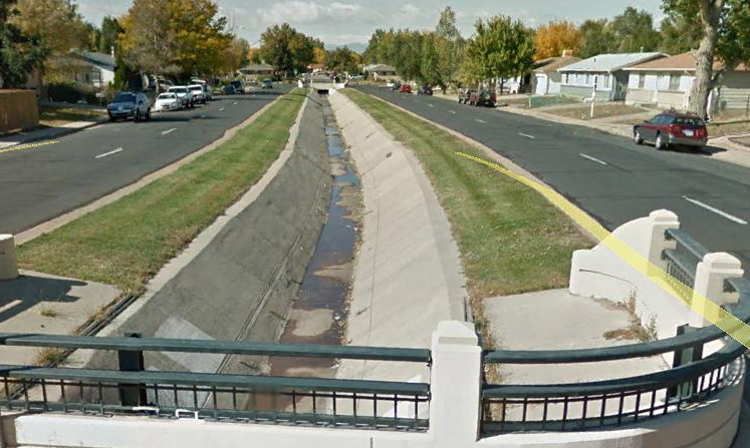 If we just replace the channel lining and exclude all of the culverts, it would still take over 600 years for us to build up enough funding from this neighborhood to pay for the replacement.

At this final location along Newlin Gulch in Parker we are in a more naturalized channel section, but one that is fairly trapezoidal and with some very large grade control structures. The property in this watershed adjacent to the creek is worth over $760 million, so we collect around $38,000 a year total. Around $13,700 of that is for maintenance. 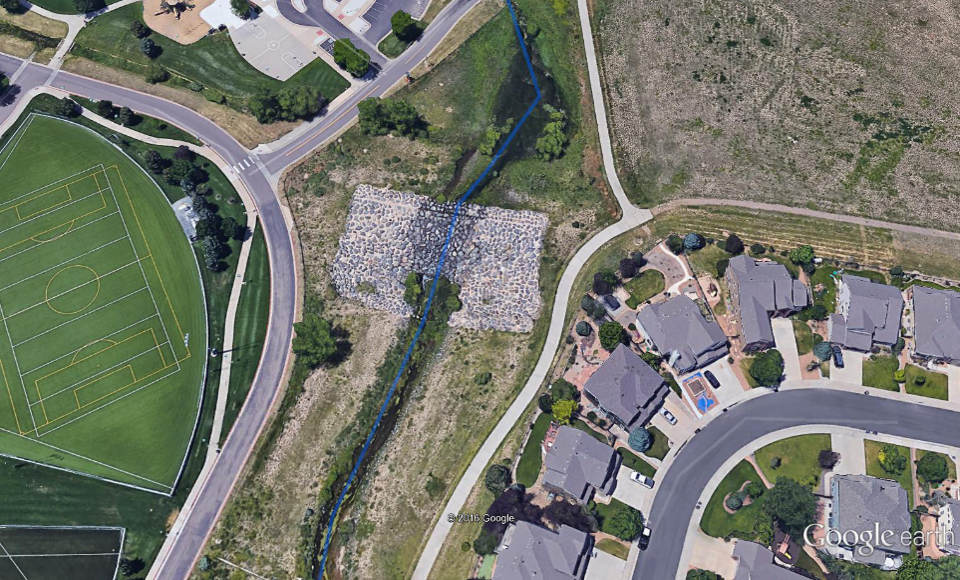 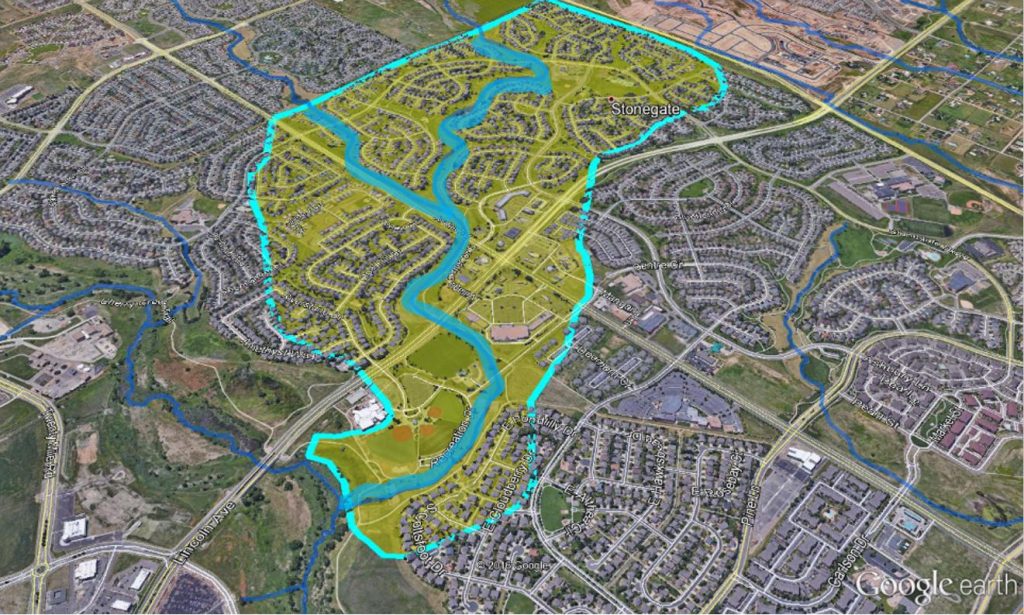 It would take over 300 years to build up the funding to replace the 25 drop structures in this part of the stream. Will they last us 300 years? Not sure I would bet on that.

Confining our urban stream systems will lead to higher long-term costs, let alone the lost ecological functions and impacts to quality of life, which are topics for another day.

Allowing even one development to squeeze down an urban stream system will basically ensure that the local government will have a significant capital project in the future when the highly structural infrastructure someday wears out. This one time financial benefit to a developer will place the long term financial burden on the local government and its taxpayers, and in all likelihood the taxes collected from the development will never be enough to pay for the public infrastructure supporting it.

Compare this to the Westerly Creek example mentioned earlier. With enough space to work with and the right design approach, we can rely on vegetation for stability rather than a bunch of structural material.

Long term maintenance along Westerly Creek involves weed wackers and trash bags rather than heavy earth moving equipment. There really isn’t anything to fix, so we get to play the role of urban gardeners.

As our cities continue expanding and redeveloping, I hope this article has demonstrated how our land use and infrastructure decisions can lead to significant long term costs for our communities, whether it’s for roads, utilities, or streams.

Let’s ask ourselves: Are we creating infrastructure that will be really expensive again in the future when it needs to be repaired or replaced? If so, then we might be guilty of the Cobra Effect. But it doesn’t need to be this way!